I just saw the last episod of AHS and i am still shocked by Beverly hope’s character .

I truly don’t understand why she is the only one who get softer and more obediente than the rest of them. I mean, of course I don’t think myself would have last longer than her to be honest. But hey; we all know if this was real life Ivy would have been the first one to die, right?

Of course, she wasn’t the best example for black woman but none of the characters  were. They were all selfish in their own way; talking about wanted a better world for everyone. When we all know they would be able to kill anyone who will not be buying their bullshit.

I had hope for Beverly, but when I saw her getting so down, she was ready to kill herself. I didn’t understand a thing. Is this really the same woman we saw earlier ? Why would she asks an other (white) person to kill her and be ready to even beg ? What was this last episod ? What does it suppose to mean ? 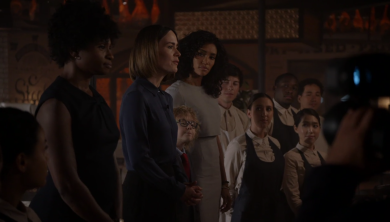 And to make her look even more « docile », « naive » and « stupid » she became Ally assistant…Come on now ! Why ? Are we, as black women, always need white people to justify been alive ? Beverly would have been died if Ally didn’t decided to save her ass…just because. Let’s be real, Ally let Kai kill his own brother and sister, she killed her own wife. I understand the girl is piss but she need to take a sit and breath a little. I don’t know why she didn’t kill Beverly. Was it innapropriate for a white feminist to kill a black women ? I guess, it’s always better to get them in your bed, or as your servent.

And the end got me fuck up! Killing Kai ?! Why? What was the point here, Beverly? She’s not the one who got the inmunity,  if someone needed to kill him it was supposed to be Ally. But it was so much better to let someone else do it. Is Beverly’s going to jail because what she did was not self protection. Kai wasn’t even talking to her. So why would she goes in jail for ? For loyalty? Because she needed revenge ? I don’t think she wanted revenge otherwise she would have done it before when he was on the ground. Maybe she wanted to kill him for THE CAUSE, not Kai’s cause but Ally’s cause. Like she didn’t understand the first time that those people would only use her.

I don’t know if i am playing the angry black women right now but like Porsha O says  »  I am a little bit tired of this steryotype of the angly black woman, cause as you can see i am black and a woman and  I am not angry at all…HELL I PISSED THE FUCK OF » !